28 INTERESTING GAMES TO PLAY AT HOME-GAME- 8

On the Day eight of the campaign #WriteAPageADay, PANDI an ancient game which is highly popular and widely played in the house holds of Tamil Nadu will be presented in detail.

Preferred surface: on the floor

Things required to play:  Chalk piece, a small stone or any flat piece of plastic/wood

How to play: Draw the pandi grid on the floor using the chalk piece 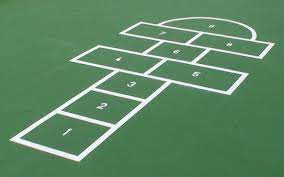 Have a toss and start to play. Stand outside the grid and throw the stone in square1 and then hop over the stone and reach square 9 and then turn back and hop till square 2. Then take the stone from square1

Now throw the stone in square 2 and from square 1 hop over the stone and reach square 9 and then turn back and hop till square 3. Then take the stone from the square 2

The same process is done with the rest of the squares and with it the round one gets completed. The player is declared out if he/she throws stone out of the grid and on the lines of the grid.

In the round 2, have the stone in the palm opened and hop from square 1 to 8. Repeat the process with the coin in the palm inverted. He/ she is out if the stone falls down. The round 2 gets over with this.

In the round 3, the player should ask the co -players for kaaya or pazhuam. If it is kaai, turn back, sit and throw the stone, it may fall on nay square.

If it is a pazhuam, turn back, stand and throw the stone. In which ever square the coin falls, hop to that square and pick up the stone. Make a mark ‘X” in that square and hop out with the stone. It shows that you own a square. Like this all the squares will be owned by the players. The one who occupies more number of squares is a winner.  A player will be out if he /she throws the stone on the marked square or places his/her leg in co –players owned square.

Reference to this game:  This game finds place in the paintings depicting the rural cultures of the State of TamilNadu. This is a favourite game of village girls and is picturised in the films and highly dealt in Tamil Literature.