28 INTERESTING GAMES TO PLAY AT HOME-GAME- 7

On the Day seven of the campaign #WriteAPageADay, AADU PULI ATTAM  an ancient game which is highly popular and widely played in the house holds of Tamil Nadu will be presented in detail.

Preferred surface: on the floor

Things required to play:  Chalk piece, 15 coins of one variety and 3 coins of other variety

How to play:  Draw the ADU PULI ATTAM board on the floor or have the chart in which the board is drawn. 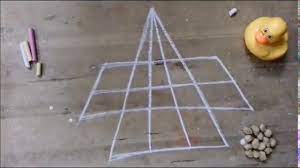 The game starts with 1 pulis placed on the apex and 2 pulis in the inner place close to the apex. Aadus start off the board. The coins must be kept at the intersection of the board lines and should be moved in those lines only.

The player with Aadu moves first by placing an Aadu on a free intersection on the board. The puli’s turn starts with a move of the puli to an adjacent position along the lines that indicate a valid moves.

Players move alternatively. A puli captures an Aadu by jumping over it to an adjacent free position. Aadus cannot move until all 15 are on board.  Puli can start capturing aadus any moment after the match has started. They can capture only one aadu at a time. They can jump over a goat in any direction, but it must be to an adjacent intersection following any of the lines drawn on the board.

Reference to this Game:  There is a movie in Tamil with the title of this game.  In village fairs, the folk artiste enact drama of  Aadu and Puli.  Moreover, in many films dealing with rural stories, this game is shown as played by the villagers.