28 INTERESTING GAMES TO PLAY AT HOME-GAME- 9

On the Day Nine of the campaign #WRITE A PAGE A DAY, POLICE THIRUDAN a popular game highly played and enjoyed by the children of all age group will be presented in detail. It is the favourite game of children because they are happy naming themselves as   police, raja, rani and manthiri. The only sad child in the game is the one who becomes more often the thirudan.

Preferred age group: Above the age of 10.

Duration of the play: Minimum half an hour.

Best time to play:  Any time

Preferred surface:  Where five members can sit comfortably in a circle

Things required to play: 5 equally cut paper, pen and a mark sheet with the names of the players written on it.

How to play: First of all in the cut papers write Police, Thirudan, Raja, Rani and manthiri one in each. 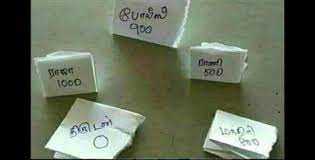 All should be folded in a same pattern and shuffled and one should lay all those together on the floor. Everyone should pick one paper and check the word written on it and only the one who has got the paper with “POLICE” written on it should announce that he is a police.

Now the game moves to the next level where the police should find the thief in two attempts. If he finds in the first attempt he will get the highest mark.  If he finds in the second attempt the second highest will be awarded and the minimum is awarded to rest of the players also (Marks differ, it depends on the children’s decision. Some will go 1000, 800, 900, 500, 0 the others 2000 1000, 500,100, 0)

This procedure should be followed in all the five rounds and at the end the final marks are calculated and high scorer is the winner.

Reference to this game:  In many Tamil novels the writer’s use this game (as a satire) “POLICE THIRUDAN to show the lack of seriousness in any search activity.