28 INTERESTING GAMES TO PLAY AT HOME-GAME 21

On the Twenty first Day of the campaign #WRITE A PAGE A DAY, OTTHAIKKU OTTHAI a game highly played and enjoyed by the children will be presented in detail.  The e power of their arms adds a chance to make your team be the winner.  It is a game played often in the front and back yards of the house or in the hall if it can accommodate all the players.

Number of persons: Minimum 10 (with more number of players the game will be more interesting)

Preferred age group: Above the age of 10.

Duration of the play: Minimum half an hour.

Things required to play:  a piece of chalk to draw a line

How to play: First two teams are formed with 5 players in each and a toss is laid. The team which won the toss will draw a line in the center and players will stand at a nominal distance from the line. The players form a chain and sing the song: 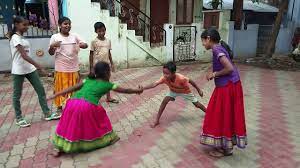 And go to the center of the line and touch it and will get back to their place.  After getting the reply from the Team 1 about the flower name and one player from each team t will come to the center line and pull each other, the player who crosses the line while pulling will go to the opposite team.  The game will continue in the same procedure with different player names and flowers and the team which has more number of players in the end is the winner.

Reference to this Game:  This game finds place in the debates about the rural cultures of Tamil Nadu. It is game that helps to familiarise with various names of flowers and inculcating the habit of singing in children.