28 INTERESTING GAMES TO PLAY AT HOME-GAME-13

On the Day thirteen of the campaign #WRITE A PAGE A DAY, Puliyaan kottai vilaiyaatu a very ancient game which is played in the house holds of Tamil Nadu will be presented in detail.

Best time to play:  Any time of the day

Preferred surface: on the floor where two or three people can sit in a circle

How to play: The play begins after the toss and the one who wins, should play first. The players should place their coins (10 dried tamarind seeds each) together on the floor and mix it well. The one who won the toss should take up all the seeds together in his one hand and should scatter the seeds on the floor. Then he/she should decide which two seeds he /she is going to strike with each other. 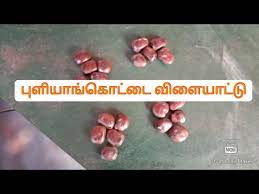 He/she should draw a line between the two seeds and then should strike it with each other without touching or disturbing the other laid seeds. If touched or disturbed he /she is out. If he/she successfully strikes those two coins with each other, he/she can take those two coins. Like these the one who collects more coins is the winner.

It is always better to choose two seeds which are at a minimum gap. The seeds that are too close need not be touched.  If one gets out, the other player should collect all the seeds together and shuffle and scatter it on the floor. The same procedure should be followed by both the players till all the seeds are collected by them.

Reference to this game: Puliyaan kottai vilaiyaatu is a major game played during the harvest of Tamarind. Puliyaan kottai finds place in many literary works highlighting its numerous usage. This is an ancient game which grandparents fondly remember the way they played and enjoyed during their free time in their childhood days. Initially parents can guide children about this game and with practice children can play it on their own.