28 INTERESTING GAMES TO PLAY AT HOME-GAME27

On the Twenty seventh day of the campaign #WRITE A PAGE A DAY, BOOK CRICKET a game that is played as cricket sitting on the floor will be presented in detail.

Best time to play:  Any time of the day

Preferred surface: on the floor where two or three people can sit in a circle

Things required to play: paper, pen and a voluminous book

How to play: Take a paper for each player and write their names on it. Take a book which has lot of pages and page number are clearly visible. First toss is laid for selecting captains and forming the team. The two captains will decide about number of players in each team basing on the availability of the members to play the game. 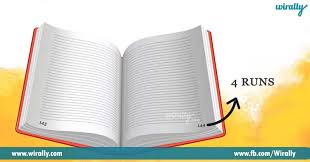 After the team formation, again a toss is laid to decide the team which is going to bat first. The batting team will hold the book and he/she has to randomly open the book for the page number.

The player should always look for the side of the book which has even numbers on it. In the opened page, note the last unit of the number. That will be his /her run. In a two or three digit number, the last ending digits like 2, 4, 6, will be taken into count. 8 is counted as a single. 0 means he/she is out.

The book should be closed and opened again. Scores should be noted in the papers.  When one is out, the next player will take the book and continue to play. The innings will continue till the batsmen are out. The team score is noted and the book is handed over to the other team.