28 INTERESTING GAMES TO PLAY AT HOME-GAME25

On the Twenty fifth day of the campaign #WRITE A PAGE A DAY,  POO PAADAL VILAYATU is a game which involves singing is played by children in their younger age in the house holds of Tamil Nadu will be presented in detail. Children enjoy this game very much as it a bit tricky game.

Preferred surface: on the floor. Usually played in the backyard or in the front yard of the house.

How to play: First two groups are formed and toss is laid. Two members from a team are selected for forming the arch. The selected members will form an arch by holding their hands up together by standing opposite to each other. 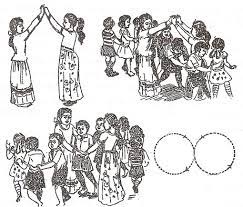 "rendu kudam oothi rendu poo poothadhaam "  for the second round and it will continue like this. While singing the word “"poothadhaam" whoever is passing the arch will be trapped by the girls forming the arch. The player will be locked in the arch and he/she is considered out. He/she will join in the arch forming group and will release a girl (one who is forming an arch) to go around with others. The game will continue till all the players get a chance to form arch and go rounds. Every time the player should sing the song while passing through the arch. Every time the number of water pots and flowers will change/ increase in the lyrics of the song.