28 INTERESTING GAMES TO PLAY AT HOME-GAME-15

On the fifteenth Day of the campaign, MOOVAR AMMANAI an ancient game fondly played by children and adults will be presented in detail. It is a highly popular and widely played game from ancient days onwards.

Best time to play: Any time

Place to play: on the floor

How to play:  Instead of toss, directly the game starts with a first chance to the younger member. 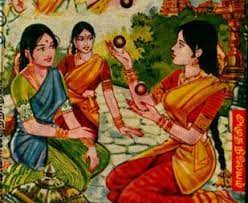 IF the player either miss a ball or doesn’t join the discussion, he/she is out. The balls/ lemons should be passed on to the next player. He/she should follow the same procedure of the game and if he /she either out or completes the process. The turn of the third player starts.

In this game discussion along with juggling or juggling with discussion is the centre of attraction. It is an interesting game involving concentration and knowledge on literature. Discussion during the game will be on topics mostly from Mythology.  Discussions can be in the form of riddles, poetry and songs. Two things at a time is the key element of the game. Many people with exceptional talents win this game by simultaneously performing this indigenous task.

Reference to this game:  Reference to this game can be found in the THIRU PERUR KALAMBAKAM – a branch of Minor Literature in Tamil where three girls play this game along with a discussion on the divine sport of Lord Shiva.  Another reference can be traced from the Major Tamil Epic “SILAPPADHIKARAM” where the glorious anecdotes of Chola kings are discussed in the game. Another form of AMMANAI is a part of the festival MATTAIYADI USTAVAM celebrated in the sri vaishnavaite shrines where flower balls are juggled with the recital of devotional hymns by the priests.