MIGHTY ROLE OF MOIRANG IN THE INDIAN FREEDOM STRUGGLE 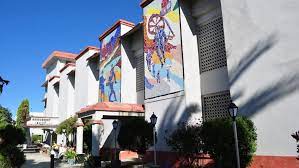 Manipur in the Nort -Eastern region of India is set in an oval valley amongst smoky blue hills, it is the home of the Meitei who dominate the populace, which is an admixture of Naga and Kuki - Chin Mizo groups amongst other colourful communities.

In this state there are many tourists attractions and places for excursions. Moirang is one such. Let's get to know a little about this fascinating place.

Moirang used to be the focal point of Manipur's early Meitei culture. Located 45 kms from Imphal, the town has an ancient temple of the pre -Hindu deity Lord Thangjing. Every May, men and women dressed in colourful  traditional costumes sing and dance during the Lai Haraoba ritual dance festival to honour the deity.

Moirang played an important role during India's  freedom struggle. The flag of the Indian National Army (INA) was first raised at Moirang on April 14, 1944.

At the INA MUSEUM there are host of letters, photographs, badges of ranks and other memorabilia of the martyrs of the INA (headquartered here during World War II) who fought under the dynamic leadership of Netaji Subhash Chandra Bose against the Allies.

That's the specialty of the place Moirang. Do visit this place during your trip to Manipur and offer your salutes to the martyrs.