A TEMPLE WHERE THE PARENTS OF NAMMAZHWAR WORSHIPPED THE LORD 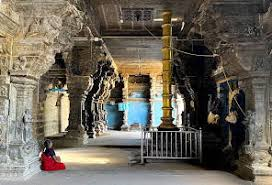 The Divya Kshetram TIRUVANPARISARAM is located 4 Kms from Nagarkoil in Tamil Nadu. The presiding deity is Tirukuralappan also called Tiruvazhmarban. The Goddess is Kamalavalli Nachiyar and the sacred water is Lakshmi Theertham and the sanctum sanctorum is Indrakalyana Vimanam.

As per sthala purana Lakshmi was frightened to find the Ugra Swaroopam of Lord Narayana as Narasimha. At the request of Prahalada the Lord attained his natural form and Lakshmi took her rightful place. Hence the Lord is called Tiruvazhmarban and the place Tirupatisaram as the Lord resides here.

Udayanangai  and Kaari, parents of Nammaazhwar worshipped at this Kshetram, and were blessed with a son - Nammazhwar who later became one among the 12 Alwars.