HOW MOUNT VESUVIUS HELPED THE STUDY OF VOLCANO? 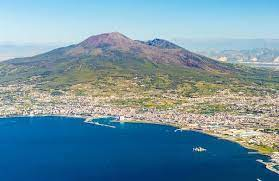 Mount Vesuvius, a volcano located between ancient Italian cities of Pompeii and Herculaneum, has received much attention because of its frequent and destructive eruptions. The most famous of these eruptions occurred in A.D.79

The volcano had been in active for centuries. There was little warning of the coming eruption, although one account unearthed by archaeologists says that a hard rain and a strong wind had disturbed the celestial calm during the precedential preceding night. Early the next morning, the volcano poured a huge river of molten rock down pour upon Herculaneum, completely burying the city and filing the harbour with coagulated lava.

Mean while, on the other side of the mountain, cinders, stone and ash rained down on pompeii. Sparks from the burning ash ignited the combustible roof tops quickly. Large portions of the city were destroyed in the conflagration.

Fire, however, was not the only cause of destruction. Poisonous sulfuric gases saturated the air. These heavy gases were not buoyant in the atmosphere and therefore sank towards the earth and suffocated people.

Over the years, excavations of Pompeii and Herculaneum have revealed a great deal about the behaviour of the volcano. By analysing data, much as a Zoologist dissects an animal specimen, scientists have concluded that the eruption changed large portions of the area's geography. For instance, it turned the Sarno river from its course and raised the level of the beach along the Bay of Naples. Meteorologists studying these events have also concluded that Vesuvius caused a huge tidal wave that affected the world's climate.

Finally, the excavations at both Pompeii and Herculaneum have yielded many examples of both classical art, such as jewellery made of bronze, which  is an alloy of copper and tin. The eruption of Mount Vesuvius and its tragic consequences have provided everyone with a wealth of data about the effects that volcanoes can have on the surrounding area.

Today, volcanologists can locate and predict eruptions, saving lives and preventing the destruction of other cities and cultures.