AN ANCIENT TEMPLE NEAR A WHITE ROCK HILLLOCKS 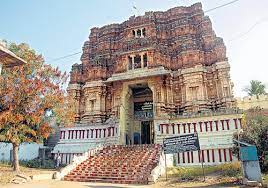 The Divya kshetram - TIRUVELLARAI is located at a distance of 27 kms from Trichy enroute to Turaiyur by road.

The presence of white rock hillocks close by , gives the name to this place as swetagiri. This temple is also called Aadi Vellarai, as it is believed that this temple pre- dated Srirangam temple.

The presiding deity is Pundareekakshan in a standing posture with His consorts Shenkapakavalli and Pankajavalli. There is also a separate shrine for Goddess. The sacred water is Divya Pushkarani and the sanctum sanctorum is vimalakriti vimanam.

Legend has it that Garudan (King of birds -Kite) and Markandeyan offered worship to the Lord.

The main shrine has two entrances referred to as Uttarayana Vaayil, mainly used from the Tamil month of Thai (January) to Aadi (July) and then on Dakshinayana Vaayil. In addition the temple has one more entrance referred to as "Naazhi Kettan Vaayil", where it is believed that Mahalakshmi intercepted and questioned Lord Vishnu upon His returning home late, after His Sojourn.

This is a vast temple and there are shrines for St Devi, Bhu devi, Surya, Chandra and Adishesha in the sanctum. There are seven theerthams (sacred water) within the temple complex and it is believed that Ramanujacharya has lived here for some time. Manavalamamuni and Desikar have sung of this great shrine. Historical evidence, on the unfinished Raja Gopuram located on the northern entrance, shows the contributions made by Hoysala Kings to this temple.