DIFFERENT STYLES OF RANGOLI MADE DURING FESTIVALS 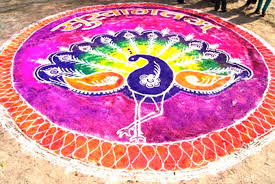 Rangoli is a part of almost all the major festivals of India. Though there are various traditions and cultures in India, rangoli, kolam or pookkolam finds a prominent place in the festivities. It adds

Rangoli is mostly drawn at the front entrance of a house, temple, or any place where the festivity is planned to be held. Usually rice flour is used to draw the rangoli, (maakolam) then multiple colours are added in between to enhance its look. In south India semmannu( Red soil) is highly used to give an outline to the rice flour drawn rangoli. There are mainly two types of rangoli drawn in the households of south India 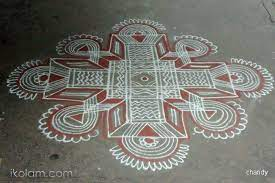 The streets of South India are highly colourful during the months of December (Margazhi), Thai January and August (Adi). Colours are mixed with rice flour or chalk powder and are filled in between the gaps in the rangoli. Mainly birds like peacock & butterfly, and then unique designs of flowers, chariots, sun, moon, stars, mud pots, Plantain trees, sugar cane are the major attraction in the rangoli.

Inside the houses, rangoli is drawn using a paste of rice flour along with the help of a cloth. (Izhaikkolam) Those who are not comfortable to draw, they use mould (achu, kuzhal) to make the impression of the rangoli with the rice flour. 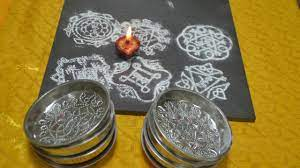 The art of drawing rangoli with rice flour is considered as one of the best art forms among the 64 fine arts stated in the Tamil Literature. All these 64 fine arts findings important place in the lives of humans. It enhance one’s creative skill and represents twist and turns, up and downs in life.

In some parts of South India rangoli is done with the help of flowers called as pookkolam. This is an important ritual with respect to the Onam festival.

These days, rangoli stickers are also available and it is simply sticked before the main door of the house. More to this stickers, design plates with beads in different sizes, shapes and colours are available in the market and it can be arranged in the preferred format or design. These patterns are used mostly during the festival of Dasara. 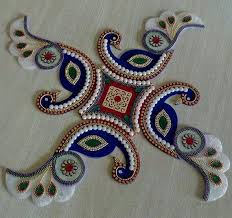 Rangoli is also drawn in the place where the Tulasi plant is laid inside the house. Flowers are decorated around the plant and the pot. During Diwali lamps are laid around the rangoli. Many house- holds draw rangoli with paints on the floor and they last for many months.

The style and size of the rangoli varies according to the region and there are plenty of unique designs drawn in various formats throughout south India.

Today being the festival of Rakshabandhan and the Avani avittam festival in Tamilnadu. People decorate their houses with rangoli and other art pieces and lightings along with mango leaves &plantain leaves which showcases the tradition of a celebration.

Draw rangoli of your own style and decorate with flowers & colours and add a dash of personal touch to the festivity at home.