"STOOPS THE SUPER STAR" A DISTINCT STORY OF THE TINSEL TOWN 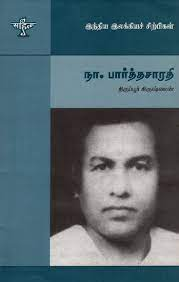 "STOOPS THE SUPER STAR" By Naa. Parathasarathy is a story dealing with the tinsel town. The story was translated from Tamil to English by  R. Natarajan. Naa. Parathasarathy was a Tamil writer and journalist. He won the Sahitya Akademi award for  his novel SAMUDAYA VEEDHI IN 1971. His contribution to Tamil Literature is very significant.

Most people, especially youngsters are very familiar with the airs of film stars via the media and tend to idolize them. Prominent Tamil writer, Naa. Parthasarathy, is able to effectively capture the bloated ego of  a film star, Vijaya Nalini, the dream girl of Tamil Cinema in the sixties and seventies.

The entire film crew including the director and the top brass give her their maximum attention , since they believe, the success of the big budget film rests on her. They pamper, flatter, please, and even resort to all kinds of antics, in order to keep her happy.

Amidst all this confusion, is the deadening silence of Nambi, the supposedly only educated, young guy, among the group, a former college professor who refuses to even look in Vijaya Nalini's direction which infuriates her. She tries her level best to get a wee bit of attention from him, eventually stooping very low, even going to the point of insulting him publicly, yet ,Nambi is not perturbed and not one bit amused by her. However, the author concludes the story , at a point, when the actress is both confused and bewildered  at this lack of attention., on the part of Nambi.

The story exposes the hollow and superficial atmosphere of tinsel town, simultaneously extolling qualities like self -esteem and self -respect. One can also look at Nambi as being too arrogant to acknowledge the actor , Vijaya Nalini who happens to be a woman.