RAJA RAO-ONE OF THE BEST INDIAN WRITERS IN ENGLISH 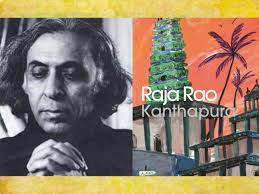 Mulk Raj Anand, R.K. Narayan and Raja Rao make  a remarkable triad,  Raja Rao is affiliated with them in time and sometimes in the choice of themes but not in his rat as a novelist or in his enchanting prose style.

A novelist and a short story writer, he too is  a child of the Gandhian Age, and reveals in his work his sensitive awareness of the forces let loose by the Gandhian Revolution as also of  the thwarting or steadying pulls of past tradition.

His four books  up -to- date are the novels :

Raja Rao hails from the Mysore state, and though the action of one of his novels strays far afield- as far, indeed , as France and England - his heart is effectively tethered to his innumerable ancient moorings with strong invisible strings of his traditional Hindu culture.