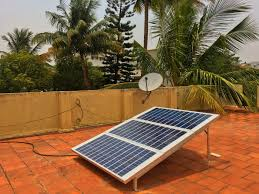 One of the sustainable ways of living is using renewable source of energy. It is technically possible to achieve almost 100% renewable energy sources within the next four decades,” concludes the World Wildlife Federation's (WWF) 2011 Energy Report, which sees wind, solar, biomass and hydropower as the future major players.

Among these at homes and commercial establishment it is better to use solar power instead of  electric power. We all are aware that it is the energy from the sun that is converted into thermal or electrical energy. Solar energy is the cleanest and most abundant renewable energy source available today. This energy can be used to generate electricity or be stored in batteries or thermal storage.

How it is an abundant source of energy ? clarifies  Professor Xiao Yu Wu , an energy Expert from MIT, "The Earth receives 23000 TW of solar energy, while the global energy consumption is 16 TW. Therefore, [100 percent renewable energy] could be possible even if we capture only 0.07 percent of the solar energy"

Here is an example of a house that runs fully with the solar power. In Puducherry  thehouse was designed to provide adequate solar protection, while also allowing an abundance of daylight and ventilation. Built on an area of 1,400 sq ft, the two-storied house has three bedrooms and one living area. From the exterior design to the interiors as well as home essentials, every single bit was planned after a conscious decision to reduce carbon footprints. This means that appliances not only run on solar energy, but also that they were purchased according to their energy efficiency.

Initially, the family installed an off-grid solar power system that generated 4.8 kWh electricity per day, meeting the essential needs of the house, including lights, fans, plug loads, portable computers, refrigerator, and water pump. It began as an exercise to test how far an off-grid solar power could meet the needs of an urban family of seven members.  with energy efficient appliances the sustainability was possible. With bi directional system the excess electricity is saved by flowing back to the grid
Along with the joy of using solar  power the family decided to bring in solar cooker  that can prepare all kinds of meals while enriching them with healthy nutrients.
That's about a green powered family home. If you plan to make your home a green home, Read this article  about the installation of solar panels and get started : https://www.solarsquare.in/blog/how-to-install-solar-panels/
{ This blogpost is a part of Blog chatter's Cause A Chatter}
at July 24, 2022

Email ThisBlogThis!Share to TwitterShare to FacebookShare to Pinterest
Labels: WRITE UP IN ENGLISH