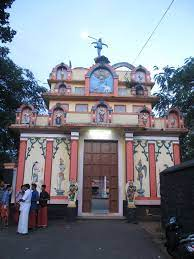 The Divya kshetram TIRUVAMUNDUR/ TIRUVANVANDUR is located at 5 Kms from Chengannur near Kotttayam in Kerala. The presiding deity is Paambanaiyappan (Pampa nadi appan as the river pampa encircles the temple) also called Kamalanathan. The Goddess is Kamalavalli Nachiyar. The sacred water is Pambai and the sanctum sanctorum is vedhaalaya Vimanam.

According to the  sthala purana sage Narada was relieved of the curse of Brahma, by praying to the Lord and obtained the boon to teach henceforth only "Tatvagnana" to mankind. Narada also composed Narada purana formulating the various ways of worshipping the Lord. Nakula of the pandavas is believed to have constructed this temple.