HOW TO IDENTIFY PHRASES? 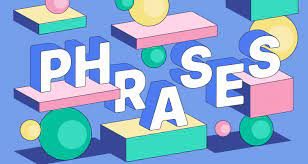 A phrase is a group of related words, without a subject, arranged in a grammatical construction and acting as a unit in a sentence.

Example : A vase of flowers stood on the table

Example: He had been living in London

3.      An adjective phrase is built around an adjective

Example: He is leading a very interesting life

4.      An adverbial phrase is built around an adverb by adding words before or / and after it

Example: She longed to live near the sea