A UNIQUE TEMPLE IN THE SOUTH INDIAN ARCHITECTURE 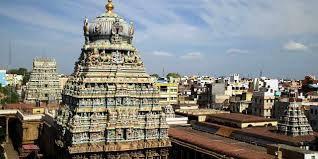 The Divya kshetram ‘’ TIRUKKOODAL” is in the city of Madurai in Tamil Nadu. The presiding deity is Koodalazhagar in a seated posture, and the Goddess is Madhuravalli is in a separate sanctum. The sacred water is Hema pushkarini and the Sanctum sanctorum is Ashtanga Vimanam. There are shrines for Lakshmi Narasimhar swamy, Lord Rama, Lord Krishna and Goddess Andal. It is interesting to find Navagrahas enshrined in this temple, which is not common in Sri Vaishnava temples.

According to the sthala purana at the behest of Lord Vishnu the clouds joined together to protect from the deluge of heavy rains. Hence the name TIRUKOODAL- Koodal means to join in Tamil.

It is one of the few temples in the country built in tiers. One can climb up and take a closer look at the Ashtanga vimanam, which enshrines Pallikonda perumal in one of its levels, and Surya Narayanan in a standing posture in the other. This aspect of a vimanam consisting of 3 tiers enshrining three different postures of Vishnu, in the sitting, standing and reclining postures is quite unique in the south Indian Temple architecture. The shadow of the Vimanam never falls on the ground.