CHEIRAOBA - A FESTIVAL OF MANIPUR 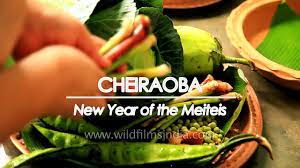 Manipur is a jewel of a land, set in an oval valley amongst smoky blue hills, it us the home of the Meitei who dominate the populace, which is an admixture of Naga and  Kuki- chin Mizo groups amongst other colourful communities.

There are many festivals being celebrated in Manipur through out the year. Among them the most famous is - CHEIRAOBA

In the month of April, the Cheiraoba celebrations are  a joyous occasion for all. Houses are given a facelift with decorations and the deities bless the food eaten. Cheiraoba marks the New year for the Meiteis. An unusual tradition is the climb of the villagers up to nearby hilltops in the belief that it enables them to rise to heights in their worldly life.

If you happen to visit Manipur in the month of April, Do remember to join the celebrations.