WHAT ARE CONJUNCTIONS AND INTERJECTIONS? 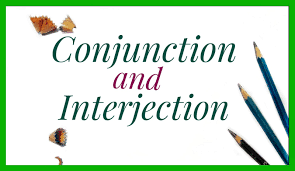 Conjunctions connect two words, phrases, clauses or sentences together. Some of the types of conjunctions are :

correlative - either, or, neither nor, whether, or as, so, not only, but also

Subordinate - although, because, since, unless, until.

He was fond of playing basket ball because it was his father's favourite game.

They should either change the strategy or just quit the game.

Interjections are words that have no grammatical connection with the sentences in which they are used. They express the feelings and emotions of the speaker and are usually followed by an exclamation mark. Since they are sounds produced by humans, they are not used in academic or scholarly writing.

Oh! it's been a week since I saw him

Wow! what a surprise.