A BEST KNOWN POEM OF THE LAST CENTURY 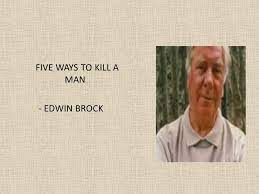 The poem FIVE WAYS TO KILL A MAN BY EDWIN BROCK not only illustrates the horrific deeds of war but also depicts the loss of humanity and human values. Edwin brock was a British poet. He poems are essentially about family relationships and childhood memories. He wrote two of the best -known poems of the last century.

The poem has an emotionless tone and it uses the language of a practical manual to explore the different methods of killing, practised through the ages. The advancement made in the field of science and technology has been reduced to the way in which human beings have adopted sophisticated methods of killing.

The poem lists four "cumbersome ways to kill a man" - crucifixion, joustling, (a medieval combat), poison gas and , atomic bombing. In the concluding stanza, the poet brings out the sense of disillusionment experienced by people in the aftermath of the two world wars. This is poignantly presented when he says that "the simpler and more direct method would be to allow him to live in the 20th century.  It is very clear that the poet strongly condemns the ruthless streak of cruelty and violence in human beings.