AN INTERESTING STORY ABOUT A TEMPLE NAMED VARAHAPURI NEAR CHENNAI 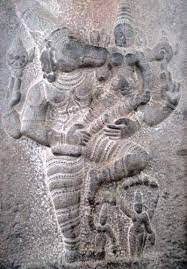 TIRUVIDANDAI is located 40 Kms from Chennai on the road to Mahabalipuram. This place is also called Sripuri and Varahapuri.

The presiding deity is Lakshmi Varaha perumal also called Nitya Kalyana Perumal in  a standing posture. The goddess is Komalavalli Nachiyar in a separate sanctum. The sacred water is kalyana theertham and the sanctum sanctorum is kalyana vimanam.

The legend has it that the sage Kavala maharishi had 360 daughters and offered all of them to the Lord. The Lord accepted them and made them into one maiden and kept her on His lap. The Lord married one maiden a day and married all the 360 daughters of the Maharishi in  a year and gained the name Nitya Kalyana perumal. Since the Lord has His consort to His left side the Kshetram is also called Edavendai.

Markandeya and Mahabali have worshipped at this kshetram.