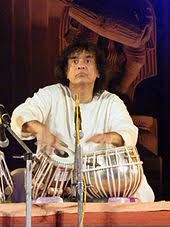 In  the blogchatter’s A2Z campaign, I will be presenting blogposts on ‘EXCEPTIONALLY TALENTED INDIAN ARTIST’ in the alphabetical order.  Today, Z-  Zakir Hussain -  Tabla. First few lines about the instrument, then about the artist.

“Music is the literature of the heart; it commences where speech ends.” — Alphonse de Lamartine

Tabla is a pair of twin hand drums. It consists of two single-headed, barrel-shaped small drums of slightly different sizes and shapes: baya and daya for left and right drums, respectively. Each drum is made of hollowed out wood, clay or metal. For stability while playing, each drum is positioned on  a chutta or guddi. They are commonly played while sitting cross-legged on the floor.
The Tabla is an important instrument in the bhakthi devotional traditions of Hinduism and Sikhism, such as during bhajan and Kirtan singing. It is one of the main Qawali  instrument used by Sufi musicians. Tabla also features in dance performances such as Kathak.

Tabla Gharanas are responsible for the development of variety of new bols, characteristic playing techniques, composition styles and rhythmic structures. Gharanas acted as a means of preserving these styles between generations of Tabla players.

Zakir Hussain is an Indian tabla virtuoso known world wide. He was awarded the United States  National Endowment for the Arts ' National Heritage Fellowship, the highest award given to traditional artists and musicians.

Zakir gave his first concert at the age of seven. He was touring by the age of eleven. His international career, included more than 150 concert dates a year. He brought great attention to and raised the profile of tabla players through his solo acts along with his excursions as an accompanist. One of his unique contributions  is the use of the "bayan" to create melody.

Nasreen Munni Kabir compiled 15 interview sessions  into the book Zakir Hussain: A Life in Music, which was published in 2018. This book takes the reader through Zakir's life from his youth, his years of intense training, and growth to fame as a renowned musician.