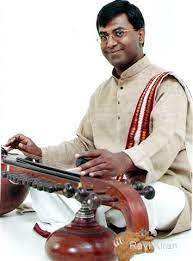 In  the blogchatter’s A2Z campaign, I will be presenting blogposts on ‘EXCEPTIONALLY TALENTED INDIAN ARTIST’ in the alphabetical order.  Today, R– Ravi Kiran  – Chitra Veena.  First few lines about the  instrument - then about the artist.

"Music is nothing else but wild sounds civilised  into time and tune." - Thomas Fuller

Chitra veena  is a lute style veena used in carnatic music. It has 21 strings in which six main strings used for melody that pass over the top of the instrument, three drone  strings and 11 or 12 sympathetic strings running parallel to and below the main strings.

The fretless nature of the instrument, Narayana Iyengar's stringing methods have made its tone 'reminiscent of the human voice. Narayana Iyengar  was a palace musician of the erstwhile  states of Travancore & Mysore developed stringing and tuning methods.

The first two fingers on the right hand are usually used with plectra to pluck the metal melody strings while a cylindrical block made out of hardwood  held by the left hand is used to slide along the strings to vary the pitch.

Ravi Kiran is an Indian slide instrumentalist, vocalist, composer, and orator and a famous chitra veena player. He has introduced several technical innovations on the instrument and created over 800 classical Indian and contemporary compositions.

Ravikiran, is known for his large repertoire and for training a number of disciples around the world. He has presented concerts for Social Harmony to highlight the unifying powers of art. He has authored several sought after books on Carnatic Music and penned a number of articles in leading Journals and Dailies.

Ravi kiran initiated the Planet Symphony Global Art-Science-Social Environmental initiative to raise awareness of the precarious climate change and the  programs has won much acclaim all around the world. He has won numerous  National and International awards. His contribution  to the world of music and to the world at large is much laudable.

(I'm participating in #BlogchatterA2Z and hyperlink to https://www.theblogchatter.co)
at April 21, 2022