JAGJIT SINGH - A GEM OF GHAZAL 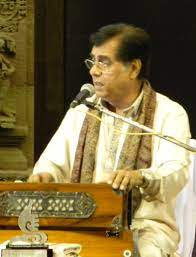 In the blogchatter’s A2Z campaign, I will be presenting blogposts on ‘EXCEPTIONALLY TALENTED INDIAN ARTIST’ in the alphabetical order.  Today, J– Jagjit Singh – Ghazal.  First few lines on the genre of music - then about the artist.

"Music is the shorthand of emotion" - Leo Tolstoy

The ghazal has historically been one of the most popular poetic forms across the Middle East and South Asia. It was introduced to India through Islamic sultanates. The 13th century poet and musician Ameer Khusrow is the the first Urdu poet. During the reign of Akbar prominent poet Muhammad Hussain Naziri of Nishapur, wrote 'GHAZALS' of great merit, and Sayyid Jamaluddin Urfi of Shiraj, wrote QASIDDAS.

The ghazal was initially composed to a purely religious theme and later romantic themes were also brought in with ambiguity. Among the Indian poets "Mirza Ghalib " is the recognised master. Ghazal is a part of Arabic poetry and ghazals are also written in Urdu, Hindi and other languages of the world. It is recited or sung in  a set format which is more tuneful than just reading a poetry. Ghazals are also a part of light classical music used in Films.
Jagjit Singh  is considered to be the most successful ghazal singer, composer and influential artist of all times. His  album, Beyond Time, was the first digitally recorded release in India. He  supported  various philanthropic endeavours like the library at  St. Mary's School, Bombay Hospital, CRY,  ALMA and Save the Children.
Jagjit Singh worked as a player singer in many films which turned out to be a block buster hits. His melodious voice fetched him fans around the world. He also composed songs for few films and particularly for the TV serial MIRZA GHALIB that was based on the life of the eponymous poet Mirza Ghalib.
A biography of Singh, entitled Beyond Time based on about 40 hours of interviews with him, was released in 2012. It was transcribed and edited by Ashrani Mathur. A book that will make you hooked on to it.
Just listen to this song and you are sure to become a fan of his voice  https://www.youtube.com/watch?v=qNJQPEgmoeE
(I'm participating in #BlogchatterA2Z and hyperlink to https://www.theblogchatter.co)
at April 12, 2022