KRISHNAN - A KEEN PLAYER OF NADASWARAM 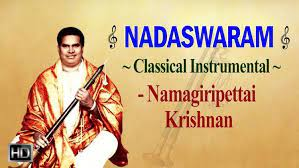 In the blogchatter’s A2Z campaign, I will be presenting blogposts on ‘EXCEPTIONALLY TALENTED INDIAN ARTIST’ in the alphabetical order.  Today, K– krishnan – Nadaswaram.  First few lines about the instrument - then about the artist.

"Music is the mediator between the spiritual and the sensual life." - LUDWIG VAN BEETHOVEN.
Nadaswaram is an ancient double reed wind instrument with a conical bore which gradually enlarges toward the lower end.  This is  a popular instrument of  South India similar to the shehnai of North India. It is a "Mangala vadhyam'  used mainly in weddings and temples along with the instruments "thavil" and "ottu". This instrument is "among the world's loudest non-brass acoustic instruments". Due to its intense volume and strength it is largely an outdoor instrument and much more suited for open spaces than for indoor concerts.
The nadaswaram contains three parts namely, kuzhal, thimiru, and anasu. It has a range of two and a half octaves, similar to the  flute, which also has a similar fingering. Traditionally the body of the nadaswaram is made out of a tree called aacha . Playing of nadaswaram is considered auspicious and  without it no function, festival, ceremony or any happy occasion is considered complete.
Krishnan is a well recognised figure as a Nadaswaram artist. Hailing from Namagiri pettai in Salem district of Tamil Nadu he established himself as a top notch  Nadaswara vidwan with sheer hard work and dedication.
He is the first one to create a album in  Nadaswaram . It comprised of all the important songs sung or played in the marriages without a single event being left out.   It is  a first of its kind and he received a tremendous response from the public.  He performed frequent broadcasts on All India Radio and toured throughout the United States, Europe, Russia, Sri-Lanka, and various Southeast Asian countries.
Krishnan's consistency came out of regular practice sessions which is admired by many artists of the same field. He always insisted his students to stick to  a practice routine in spite of winning many prizes and accolades. His contribution to the world of music is immense and for this  the Government of India honoured him with Padma Shri.
(I'm participating in #BlogchatterA2Z and hyperlink to https://www.theblogchatter.co)
at April 13, 2022