A CALL TO THE FISHERMEN 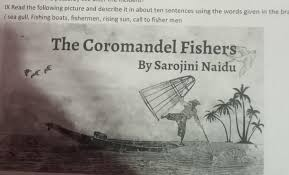 Sarojini Naidu is a renowned name in the field of Indian Poetry. Mostly all the school  English textbooks in India carry a poem of her. She is recognised  easily by school children as "Nightingale of India"  rather than as  a poet, Freedom Fighter & as a first female to be the Governor. She equally wrote poems for children as well as for Adults; and children do enjoy them.

The Father of the Nation Mahatma Gandhi gave her the title "Bharat Kokila" (Nightingale of India), for her contribution to poetry & moreover as her poems could be sung as well. Most of her poems have lines repeated across stanzas. Some of her poems are representatives of folk culture of India.  "Palanquin bearers" and "wandering singers" are examples of folk songs in her poetry.

Like Tagore and Aurobindo, Sarojini Naidu too was more than a poet. She is one of the Mother India's most gifted children. As Rhymer's club member Sarojini Naidu met Arthur Symons & Edmund Goose that helped her to acquire the verbal and technical accomplishment and the mastery of phrase and rhythm without which she could not have translated her vision and experiences into melodious poetry.

Most notable of her early poems was "To a Buddha seated on a Lotus". "The Golden Threshold" - Sarojini Naidu's first collection of poems came out in 1905. "The Bird of Time" is her second volume of poems. "The Broken Wing" of 1917 is the final collection. "The Flute Player of Brindavan" is a jewel of a lyric.  Coromandel Fishers, Snake Charmers, the corn- Grinders, The Indian Dancers and the Bangle-sellers all find place in her poetry. Nature too attracted Sarojini Naidu and she sang  in praise of "Henna". Her description of  a tropical night in "Leili" is one of her most satisfying nature poems.

"Her work has a real beauty" said Sri Aurobindo in 1935 about Sarojini Naidu's poetry. She received many Laurels & honours from around the world.

Let's take a look at her poem "Coromandel Fishers":

Coromandel Fishers is a poem highlighting the folk culture. The poem is about the life of fishermen in the Coromandel coast in south India. The poet insists to have  an optimistic view of Life and Nature stands as a symbol of it. It is a form of a lyrical poem in a fishermen's perspective.

In the poem a fisherman invites his fellow fishermen to get to work by the dawn. The phrase "Rise, brothers, Rise refers to the early start of the fishermen. The poet beautifully describes the relationship between the fishermen and the Nature. It also shares the hardships faced by the fishermen as their livelihood is full of adventures in the sea.

Personification, simile, imagery &metaphor find place in the poem. Sea is the mother and fishermen her sons as it feeds them and helps them to sustain their life. That's why fishermen worship the sea and don't fear to go to sea when they are both sad and happy. Similarly clouds are their brothers because they guide the fishermen, while the waves are companions because they keep moving with them.

Coromandel fishers can be interpreted as a beckoning call to those who wish for the country's freedom.