Greenery is a visual treat enjoyed by all. It is good for eyes too. Green earth is the focal point to ensure a safe planet. In this regard many the organization, government establishment, private sector and individuals and groups are working hard in achieving fine green space by increasing the plants and trees. As part of this  green  drive and greener initiative roads are being adorned with trees on both sides. Apart from this  as an extra effort and a two in one plan , the  Greater Chennai corporation is totally dedicated and there is a absolute surge in the green space in Chennai

* Usually on a road, the center has medians laid to avoid crossing the roads amidst heavy traffic. The iron medians are removed and  a concrete wall has been made . and on it a countless number of saplings and plants has been planted.

To avoid any damage to the plants and also to avoid / breakage during the jumps made by the so called adventurous people in the roads, the plants has been supported and covered with  a steel metal fence and the jump s/ cross is ceased as well as the growth of the plants is assured  a safety.

Above all the way the workers of the corporation water these saplings every day with a water lorry in which a man with a hoes pipe waters the saplings  which are in between the roads by sitting at the end of the lorry. It is a superb and a highly caring activity undertaken by the corporation here. They deserve  a hats off.  Because then the most other parts of India, the day temperature in Chennai is always high and the plants need water everyday for a uniform growth. Without watering these plants, the whole plan of bringing greenery goes astray.

The thing next to this medians is the fly overs that are being increased day by day to ease the traffic flow. Now there are numerous newly  built fly overs being opened  to public in Chennai. There is an ample space underneath it and that is too is being used for gardening and  to spread the green effect. It seems like a green plat form. 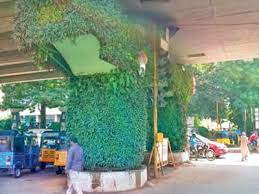 These are designed so as to facilitate vertical garden under bridges and pillars. A lot is revealed about vertical gardening from the name, to be fair. It means growing up, or the opposite of your normal horizontal system of growing a garden.

May be these are in many cities in India, But to Chennai all this started in 2019 and under 14 fly overs the vertical gardens on the pillars is made to increase green space. Apart from providing greenery the plants help to counter the  growing pollution on roads.

Crotons, money plants are kept on a well arranged small compartments in the pillar. the whole pillar  stands  like a green bundle with new and old leaves of different sizes and shapes.

This green wonder has brought a unimaginable beauty to our city and this has even created a green idea in people also to have and save, and guard this beauty of nature. 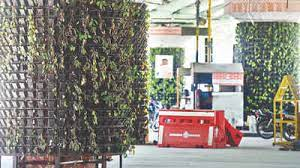 (This blogpost is a part of Blog chatter's CauseAChatter)
at September 03, 2022