A TEMPLE FOR THE FAMILY OF LORD KRISHNA 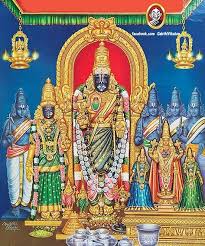 The divya kshetram -TIRUVALLIKKENI is located in the city of Chennai. The presiding deity is Parthasarathy also called Venkata Krishnan in  a standing posture and the Goddess is vedhavalli thayar. The sacred water is Kairavinisaras  also called Allikeni. The sanctum sanctorum is Anantha vimanam.

The alli flowers ( a subset of Lotus flowers)  in the temple tank lend the name Allikkeni. In the main sanctum besides the main deity there are also Vigrahas (idols) of Rukumini, Balarama, Satyaki, Anirudha and Pradhyumna. This particular kshetram is the only one, which depicts the images of the family of Lord Krishna in the sanctum.

The ustava vigraha of Lord Parthasarathy bears scars supposed to be from the arrows of  Bheeshma, while he acted as the charioteer to Arjuna, in the Mahabharata war. There are separate shrines for Ranganatha, Vedavalli, Narasimhar, Varadarajar and Andal.

As per Sthala purana Lord Venkateswara promised sumathirajan to give darshan as Parthasarathy and had the vigraha installed by Atreya maharishi at this shrine.

Vaikunta Ekadashi and the Brahmot ustavam during the Tamil month Chithirai draws a very large crowd of piligrims.