A FAMOUS TEMPLE OF GODDESS ANDAL IN HER BIRTHPLACE 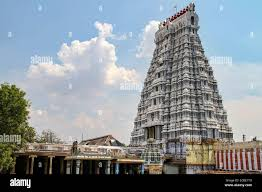 The Divya Kshetram “Tiruvilliputtur / Srivilliputhur” is close to Tenkasi – Virudhunagar road in Tamil Nadu. This kshetram is the birthplace of Periaazhwar and Sri Andal. The Presiding deity is vatapatrasayee in a reclining posture. In the Goddess Andal shrine Lord Rangamanar is with Andal and Garudaazhwar on the either side. The Goddess is also called Kothai Nachiyar. The sacred water is Tirumukkulam and the sanctum sanctorum is samsana vimanam. The standing posture of Garuda along with Lord Vishnu is unique in this temple.

The legend has it that Periazhwar was serving the deity in this kshetram by offering garlands from the garden he maintained. Once while plucking flowers in the garden he found a child on a flower in the garden and named her Andal and brought her up in the service of the Lord.

One day periazhwar found Andal wearing the garland meant for the Lord. Discarding that garland he prepared fresh garland and offered them to Lord.  Periazhwar was surprised to find the Lord refusing  to accept the garland except the one used by Andal.  Hence Andal is called Choodi Kodutha Nachiyar. As per the wishes of the Lord periaazhwar gave Andal in marriage to Sri Ranganathar and Andal on entering the sanctum merged with the Lord.

It is believed that two hunters named villi and puthan built this town and hence this place gained the name Srivilliputhur. Andal’s celebrated 30 verses in praise of the Lord, called Tiruppavai, are being rendered in all vaishnavite temples during the early hours of each day in the Tamil month of Margazhi.

The Andal temple now stands on that place, which belonged to Periazhwar who had built his house there. As one enters the temple compound, one can see sri Periazhwar’s Nandavanam on the left.

The Tiruppavai verses are inscribed on the gold plated Sanctum sanctorum of Andal shrine. This temple has among the tallest towers in Tamil Nadu. The 12 – tiered Rajagopuram (sanctum sanctorum) rises to a height of 192 feet, with exquisite carvings, which has been adopted in the emblem of the Government of Tamil Nadu.

On this day of Aadi pooram the birth day and birth star of Goddess Andal, let’s offer prayers to her and seek her blessings to be blessed in every way.