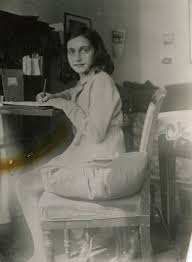 Anne Frank was born to Jewish parents in 1929 in Frankfurt. In 1933 her family fled from the terror of the National Socialists to Holland from Germany. After the invasion of Netherlands  by German troops, Anne Frank and her family hid in the near annexe to a house in Amsterdam. There she wrote her world famous diary. After the betrayal of their hiding place in 1944, their family was deported and she died in the concentration camp.

With the publication of her diary, Anne frank became a symbol of the millions of Jews who fell victim to the racist extermination policy.

THE PORTER’S FAMILY, EVE’S DREAM, PAULA’S PLANE TRIP, KATHY, THE FLOWER GIRL and BLURRY THE EXPLORER are some of her best short fictions from “Tales from the secret Annexe.” Anne Frank died in 1945 in the concentration camp at the age of 15