A STORY OF A SURVIVOR- RUTH ELIZABETH BECKER 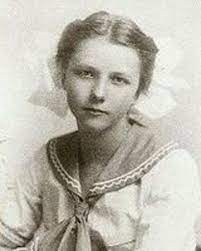 Many of you might be aware of the story of Ruth Becker Blanchard, this is how she was known later. The movie TITANIC has left a memorable impact on many and moved people across the globe.

Survivor  is a noun meaning  a person who survives, especially a person remaining alive after an event in which others have died. Or  the remainder of a group of people or things or a person who copes well with difficulties in their life.

Let’s see how or in what terms Ruth is a survivor?

Ruth is one of the youngest passengers on the Titanic at the age of 12, and  until recently was on eof the few remaining Titanic survivors. Her story is harrowing, but it’s inspirational that some one so young was able to exhibit such bravery, even in the face of a horrific disaster that few of us can truly picture in our minds.

The daughter of  a Lutheran missionary, Ruth was born in Guntur, Andhra Pradesh, India in 1899. When her brother became ill, her mother Nellie decided to take him and the rest of the family to Benton Harbour, Michigan for medical treatment. Ruth, her mother, and her younger brother and sister boarded the RMS Titanic as second class passengers, with her father waiting behind in India to rejoin them later. Ruth and her family marvelled at the beauty  and grandeur of the ship. But their trip took  a nasty turn when disaster struck.

More specifically, the Titanic  struck an iceberg and began sinking rapidly. Ruth’s mother managed to get into Lifeboat No:11 with her two youngest children, but there was no room left for Ruth. Nellie sobbed as she was separated from her daughter , who ended up in Lifeboat No:13.

As Ruth’s lifeboat was lowered into the water, it was very nearly crushed by Lifeboat No: 15, which as being lowered too quickly. A crew member managed to cut the ropes binding No: 13 to the ship at the last minute, and the boat slid away in the nick of time. The air was filled with chilling sound of screams from those stranded in the icy water.

Finally, the life boat was rescued by the RMS Carpathia. After several tense hours of waiting and dreading the worst, Ruth was overjoyed to see her mother and siblings alive and well. She was also happy to discover that the Polish woman from her lifeboat had been reunited with her baby.

Ruth refused to talk about the traumatic Titanic sinking incident for many years. Later , she began to talk more about it, and made appearances at Titanic Historical Society conventions along with other Titanic survivors.

In 1990, Ruth Becker Blanchard took a cruise to Mexico, her first time as  a passenger on a ship since the Titanic disaster. She died later that year at the age of 90, and her ashes were scattered at sea, directly over the Titanic wreck.