A TEMPLE WHERE A SISTER ADDRESSED HER BROTHER AS 'KALVAN' 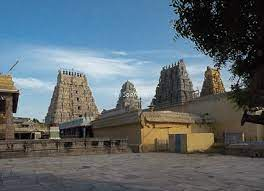 The Divya kshetram "Tirukkalvanoor" is located within the Kamashi Amman Temple in Kanchipuram, Tamilnadu.

The presiding deity is Aadi Varaha perumal in standing posture and the Goddess is Anjilaivalli nachiyar. The sacred water is Nitya Pushkarini and the sanctum sanctorum vamana vimanam.

The legend has it that Goddess Parvati standing on one foot meditated upon Lord Siva under a mango tree to be united with him in marriage. She sought the blessings of her brother Lord Vishnu and her prayers were answered.

There is another story that Goddess Parvati sighted Lord Vishnu overhearing the conversation between her and Lakshmi, upon which she addressed Him as Kalvan