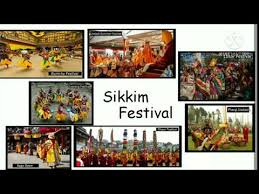 Sikkimese festivals are held according to the Buddhist calendar so the months of the English calendar given are approximate. One of the most intriguing dance forms is the CHAAMS. These are ritual dances of the lamas, which feature colourful masks and quaint musical instruments and are held at various monasteries during the festivals.

3.  Saga Dawa -  June- The Triple Blessed Day is the holiest of Buddhist festivals.

This is  a little info on the festivals celebrated in Sikkim. Try to plan your trip during any one of these festivals and no doubt you will carry wonderful memories back home.

Do share about a major festival of your state in the comments below.