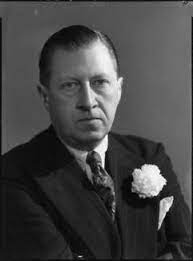 Osbert Sitwell was a prolific British writer who has published poems, short stories, novels and memoirs. Simplicity in style and satirical in theme were the hall marks of his poetry. His autobiography, Left Hand, Right Hand! (1945-50) was a work for which he was well remembered.

The poem "THE BLIND PEDLAR" in which Sitwell's cleverness and satire are fused, is a moving commentary of  a visually challenged pedlar who has a ring side "view" of life. Being an observer of life from the pavements with his wares laid out before him, he laments his inability to see even the wares that he sells. He repeatedly curses the moment of his birth which rendered him blind and unable to see the world as others do. He regrets not being able to see the beauty of nature whose breathtaking magnificence he describes poignantly. He indulges in self- consolation by saying that when he thinks of the suffering of the people, the ill effects of war, the selfishness of human beings and the decay of values, he is glad that he cannot see. The poem brings out Sitwell's contempt for war as a dehumanising force.

In the first three stanzas, he regrets not being able to see the world. Beginning with the very wares that he sells, which he is unable to see, he goes on to talk about how he is deprived of the beautiful sights of nature. It is with so much delight that the pedlar describes nature, expressing a deep desire to witness the first showers of April  and the newly bloomed flowers on a spring morning. While thinking of all the beautiful sights that are denied to him, his heart is filled with sadness and regret.

However, in the last two stanzas, the pedlar changes his stance. The poet's experiences in the First world War had left him bitter about it, having seen the abject suffering of the people. The fourth and fifth stanzas may be reflective of this idea as the pedlar states that he is glad that he is blind because he does not have to see the suffering of the young crippled men with burnt faces, a clear reference to wounded soldiers.

On the other hand, he is also glad that he does not have to see the rich and selfish who have thrived on the sufferings of the others and continue to thrive on their wealth. Apart from reflecting his protests' against smugness and hypocrisy. "The Blind Pedlar' has a freshness of movement and definiteness of purpose.