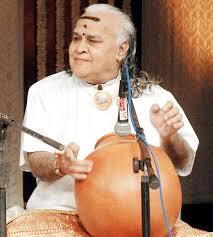 In  the blogchatter’s A2Z campaign, I will be presenting blogposts on ‘EXCEPTIONALLY TALENTED INDIAN ARTIST’ in the alphabetical order.  Today, V-  Vikku Vinakagaram -Ghatam. First few lines about the Instrument, then about the artist.

“Music acts like a magic key, to which the most tightly closed heart opens.” ― Maria von Trapp
Ghatam is an ancient percussion instrument of India. It is a clay pot with narrow mouth. Although the ghatam is the same shape as an ordinary Indian domestic clay pot, it is made specifically to be played as an instrument. The Ghatam is used together with the Mridangam in concerts.
Ghatam  is usually placed on the lap of the performer, with the mouth facing the belly. The performer uses the fingers, thumbs, palms, and heels of the hands to strike its outer surface to produce different sounds. Different tones can be produced by hitting areas of the pot with different parts of the hands.
Ghatams are mostly manufactured in Manamadurai, a place near Madurai in Tamil Nadu. Though this instrument is manufactured in other places like Chennai and Bangalore, too, Manamadurai ghatams have special tonal quality. It is believed that the mud is of special quality. The Manamadurai ghaṭam is a heavy, thick pot with tiny shards of brass mixed into the clay. This type of ghaṭam is harder to play but produces a sharp metallic ringing sound which is favored by some player.
Vikku vinayakaram is an extraordinary ghatam player, his concerts are attended in large numbers and in each concert a novel approach to the art can be found and  it is highly relished by the audience. His concert career began at the age of 13.
Vikku vinayakaram accompanied many vocalist in the carnatic music circle. His tryst with the international music platform started when he  played along with John McLaughlin and  Zakir Hussian.
Vikku Vinayakram is Principal of Sri Jaya Ganesh Tala Vadya Vidyalaya in Chennai, India – the academy established by his late father and teacher in 1958. It continues to produce new stars of Carnatic percussion. He is credited for popularising  the Ghatam and known as "God of Ghatam"