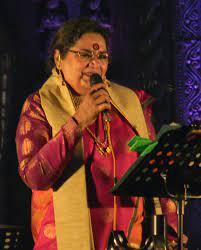 In  the blogchatter’s A2Z campaign, I will be presenting blogposts on ‘EXCEPTIONALLY TALENTED INDIAN ARTIST’ in the alphabetical order.  Today, U–  Usha Uthup –  Pop.  First few lines about the  art form - then about the artist.

"“Music can name the unnameable and communicate the unknowable.” –  Leonard Bernstein

Indian Pop Music or Indi Pop is a pop music produced in India independent from film sound tracks. With the Ahmed Rushdi's song "KO KO KORINA, Pop music originated in the  South Asian region and it has been adopted in India since then.    From the early 80's Pop music began gaining popularity across India.

Later Indi-pop music faced increasing competition from filmi music. Major pop singer stopped releasing albums and started singing for movies. Recently, Indian pop has taken an interesting turn with the  "REMIX" , in which the songs from past Indian movie are added new beats.
Indian pop is closely linked to Bollywood, Kollywood and Tollywood.  The variety of South Asian music from different countries are generally known as Desi music. There are many number of  best selling albums and music videos in pop music in India.

Usha Uthup is a prominent Indian pop singer and her first public performance happened at the age of nine. The fusion approach helped her to pioneer her unique brand of Indian pop in the 1970s. she received a lot of recognition for having a unique voice that ranges between contralto and alto.

Usha Uthup received world wide recognition. When she visited Nairobi as part of an Indian festival, She was so popular that she was invited to stay on. Singing the nationalistic songs in Swahili made her extremely popular and the then President Jomo Kenyatta made her an Honorary Citizen of Kenya. She sang the famous song "Malaika" ('Angel') with Fadhili Williams who was the original singer. She produced a record "Live in Nairobi" with a local band Fellini Five.

Usha Uthup  recorded her first album with Luis Banks for which she was paid Rs. 3500. Since then, she has recorded numerous albums. Usha's Hindi version of Michael Jackson's "Don't Stop Til You Get Enough", titled "Chhupke Kaon Aya", can be found on the album Tom Middleton – The Trip .  She made appearances  as guest in Television shows  apart from singing and acting. Usha Uthup was  bestowed with many honours and prestigious awards from around the world.