In the blogchatter’s A2Z campaign, I will be presenting blogposts on ‘EXCEPTIONALLY TALENTED INDIAN ARTIST’ in the alphabetical order.  Today, B – Bismillah Khan - Shehnai.  First few lines on the instrument –Shehnai, then about the artist.

Shehnai is a double reed conical wood instrument with a flaring metal bell attached to the bottom of it. The instrument is of about 12–20 inches (30–50 cm) in length, with six to eight keyless finger holes along its body.

The name for the instrument is believed to be derived from two words, shah & nai. Shah stands for the meaning of “royal” and “nai” meaning barber in Hindi. As it is mostly played by barbers in the royal courts. Thus, the name shehnai came into existence. 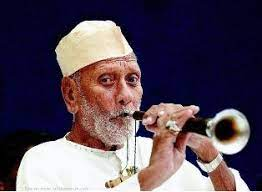 Recipient of highest civilian honour “Bismillah Khan is synonymous of shehnai and he only brought it to the concert stage. The melodious music which he brings out from the shehnai is mellifluous and mesmerising.

Bismillah Khan religiously practised the shehnai and attained perfection in a very short time. The flowing waters of the River Ganga in Benaras inspired him to improvise and invent 'ragas' that were earlier considered to be beyond the range of shehnai.

Bismillah Khan was honoured with the title “Ustad” for popularising the instrument. Though he mastered the art he felt that he has little to share with his students. Because of which he had a minimal number of disciples and he attributed all his mastery to the blessings of Lord shiva.

Bismillah Khan began his career by playing at various stage shows. He got his first major break in 1937, when he played at a concert at All India Music Conference in Calcutta.

Bismillah Khan had the rare honour of playing the shehnai on the eve of India's Independence in the year 1947. He has delivered concerts across the globe. The glory of this shehnai maestro can be read through six existing popular biographies.