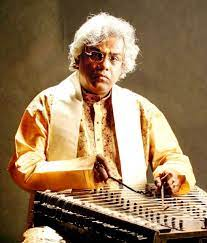 In  the blogchatter’s A2Z campaign, I will be presenting blogposts on ‘EXCEPTIONALLY TALENTED INDIAN ARTIST’ in the alphabetical order.  Today, T–  Tarun Bhattacharya  –  Santoor.  First few lines about the  instrument - then about the artist.

" A strange art – music – the most poetic and precise of all the arts, vague as a dream and precise as algebra"  - Guy de Maupassant

Santoor is an instrument is a trapezoid -shaped hammered dulcimer made of walnut and has 25 bridges. Each bridge has 4 strings, making for a total of 100 strings. It is a traditional instrument in Jammu and Kashmir, and dates back to ancient times.

Santoor was used to accompany  folk music in Kashmir. It is played while sitting and placing it on the lap and is played with a pair of light wooden mallets held with both hands.
The santoor is a delicate instrument and sensitive to light strokes and glides. The strokes are played always on the strings either closer to the bridges or a little away from bridges: the styles result in different tones. Strokes by one hand can be muffled by the other hand by using the face of the palm to create variety
Tarun Bhattacharya is a santoor player and the inventor of "mankas" or fine tuners that help in quick tunning of santoor.  His technique of playing the santoor facilitates the playing of "Krintans, Ekharatans, Boltans" broadening the use of the instrument in various traditional art forms. His improvisations on the shape and string arrangements have resulted in a deeper and more classical sound for the instrument.
Tarun Bhattacharya created an audio CD  of a raga and was released by the singer Girija Devi at the ITC Sangeet Research Academy in the month of september in 2017. He received many awards and citations for his excellence in handling the instrument.
Apart from a musician, Tarun works for social causes and  has endorsed the End Polio Now campaign of Rotary International as its ambassador. He has been recognized by the Indian National Polio Plus Committee both at the India Habitat Centre and the Calcutta Press Club for his role in promoting the cause
(I'm participating in #BlogchatterA2Z and hyperlink to https://www.theblogchatter.co)