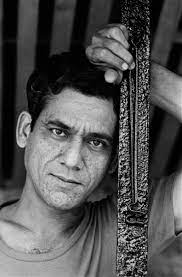 In  the blogchatter’s A2Z campaign, I will be presenting blogposts on ‘EXCEPTIONALLY TALENTED INDIAN ARTIST’ in the alphabetical order.  Today, O –Om Puri –  Theater.  First few lines about the art form - then about the artist.

" Music does not replace words, it gives tone to the words” -Elie Wiesel
Theater is a specific place of performance and is collaborative form of performing art that uses live performers, usually actors or actresses, to present the experience of a real or imagined event before a live audience in a specific place, often a stage.
The MAHABHASYA by PATANJALI a treatise on Grammar from 140 BCE provides a feasible date for the beginnings of theatre in India. Having been an important part of human culture for more than 2,500 years, theatre has evolved a wide range of different theories  and practices along with technical aspects  and theater unions.
Indian theatre is one of the most ancient forms of theatre and it features a detailed textual, sculptural, and dramatic effects  and after Independence it spread throughout India as one of the means of entertainment.
Om Puri was an alma mater of FTII and NSD which made him a renowned theater artist and an versatile actor of Indian cinema.  He has made a mark in both Bollywood and Hollywood films. Puri's first film was Chor Chor Chhup ja, a children's film, Subsequently, Puri worked in numerous Indian films. He had a cameo in the highly acclaimed film GANDHI  directed by RICHARD ATTENBOROUGH
Om puri also worked in TV serials. His notable appearances include  Bharta Ek Khoj, Yatra, Mr. Yogi, Kakaji Kahin, Sea Hawks, Antaral and  Savdhaan India 's second season.
Unlikely Hero: The Story of Om Puri is a biography that brings forth some of the memorable moments of Om Puri's  life — from his theatre days to his rise in the film industry. Om Puri is an extremely talented actor who worked with passion and perseverance and did justice to the roles he played.
(I'm participating in #BlogchatterA2Z and hyperlink to https://www.theblogchatter.co)
at April 18, 2022