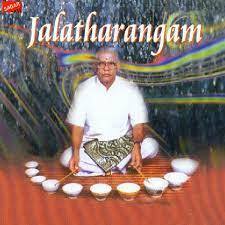 In the blogchatter’s A2Z campaign, I will be presenting blogposts on ‘EXCEPTIONALLY TALENTED INDIAN ARTIST’ in the alphabetical order.  Today, G– Ganesan – Jala Tarangam.  First few lines on the instrument - then about the artist.

"Without music, life would be a mistake" - Friedrich Nietzsche

Jal Tarangam is a percussion instrument which gives out a melodious music. It is a set of bowls filled with water. This is a prominent and ancient wave instrument. Porcelain cups are arranged in a semicircle in front of the player and the player softly hits the cups with a wooden stick on the border to obtain the sound.

Anayampatti S. Ganesan is a Jala Tarangam artist and he delivers concerts throughout the world.   His Jala Tarangam is "a set of 19 antique porcelain bowls from China that are 100 years old".  Delicate built and design, lack of ease, concentrating on the volume of water and changing it while playing complex ragas makes it a rare choice apart from other difficulties.

He is a veteran in the field of Jala Tarangam and is a busy artiste in the Margazhi festival of Chennai in the December-January season. His disciple, Vikas Achutharamaih, is gaining reputation as a jalatarangam vidwan.

Anayamapatti S.Ganesan did his best to save this instrument and revive its past glory. This instrument continues to play a big part in the Indian Classical music scene.

(I'm participating in #BlogchatterA2Z and hyperlink to https://www.theblogchatter.co)
at April 08, 2022