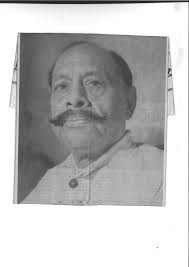 In the blogchatter’s A2Z campaign, I will be presenting blogposts on ‘EXCEPTIONALLY TALENTED INDIAN ARTIST’ in the alphabetical order.  Today, F– Faiyaz Khan – Hindustani Vocal.  First few lines on the genre of music - then about the artist.

Hindustani Music runs throughout the Sub continent and the name itself suggests its place of Origin. It is a style of vocal presentation most popular in Northern part of India. It lays emphasis on the improvisation and exploring all aspects of raga. This art form is taught through the ancient Guru-Sishya tradition.

Dhrupad, Khyal and Tarana are the major forms of Hindustani vocal music. Though Hindustani music is clearly focused on vocal, instrumental music too finds place from the ancient days.

The greatest and the most influential vocalist of the century, an exponent of Agra Gharana, “Gyan Ratna”,”Aftab-e-Mausiqi”, performer at Jorasanko Thakurbari, the residential abode of Rabindranath Tagore and the list goes on describing the greatness and talent of Faiyaz khan in the field of Hindustani Music. A vocalist par excellence and a successful Guru in producing many sishyas in the Gurukula lineage.

Faiyaz Khan’s first performance was in the age of 24. His musical lineage goes back to Tansen himself. Genius, musical ancestary, and training combined to produce this wonderful artist. His specialities were Dhrupad and Khyal. He is one of the most reputed and respected exponents of Hindustani classical music in recent times.

Faiyaz Khan ‘s glory  and contribution to the world of Hindustani  music can be read in the hidden treasures of books like “PILLARS OF HINDUSTANI MUISC” BY .B. R DEODHAR, “GREAT MASTERS OF HINDUSTANI MUSIC” BY SMT. SUSHEELA MISHRA. These will guide the younger generation to learn from the life and the journey of this vocal legend.