CHEMBAI - THE CARVER OF CARNATIC MUSIC 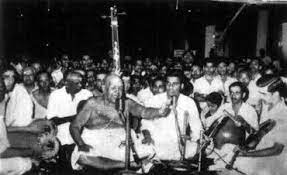 In the Blog chatter’s A2Z campaign, I will be presenting blogposts on ‘EXCEPTIONALLY TALENTED INDIAN ARTIST’ in the alphabetical order.  Today, C – Chembai – Carnatic vocal.  First few lines on the genre of music - then about the artist.

“Music is the language of the spirit. It opens the secret of life bringing the peace, abolishing strife.”- Khalil Gibran

Carnatic music is a traditional form of classical music which is sung with krithis set in sapthaswaras in the ragam thalam format. The krithis are in many different languages like Sanskrit, Tamil, Telugu, Kannada, Malayalam etc.  Carnatic music is predominately vocal and it originated through singing bhajans and reciting Thevaram or Divya Prabhandam in temples. One way it developed from the Bhajan sampradayam.

Then it flourished with many vaggeyakaras like Annamayya, Purndaradasar, Thyagarajar, Muthuswamy Dikshithar, Shyama Sastrigal, King Swathi tirunal of Travancore, Mysore Vasudevachar, who were patronised by kings and rulers of the province. It attained a state of major art form of south India and many vocalist raised to the top with frequent concerts organised by sabhas. Sabhas organised music festivals and concerts on important days and occasions. This led to the prosperity of this art and the artists.

Carnatic music owes its name to the Sanskrit term Karnâtaka Sangîtam which denotes “traditional” or “codified” music. Carnatic music concert are performed by a vocalist, and accompanists on mrudangam and violin.  Ghatam, Morsing, Kanjira are also accompanied in few concerts. Carnatic music instrumental was also popularised at a later date.

Hailing from Kerala, Chembai is a great musician of Carnatic Music, who was conferred with the title “Sangita Kalanidhi.”  He was a very simple man and his simplicity was a boon to his students that made him to support his disciples on the stage by performing many concerts with them.  Chembai was noted for his powerful voice and majestic style of singing.  His Sangeetam, Saareeram and Saahithyam were exact and clear.  Even a child can follow his singing.  In Carnatic Music according to the Ragas, a vocalist can present Kalpana Svarams with his imagination abiding to the rules of the Ragas.  In this, Chembai was extra-ordinary and well known.

His first public performance was in 1904, when he was nine.  His empathy for his accompanists and disciples was noteworthy and he would go to great lengths to encourage them.  This made Chembai a great example of Guru Sishya Parampara and he made many of his disciples to reach great heights in the field of Carnatic Music. One such is Dr .K .J. Jesudass is a proud disciple of Chembai. Chembai had been conducting a music festival in his native village from 1924 onwards and he contributed immensely for the development of this art form.