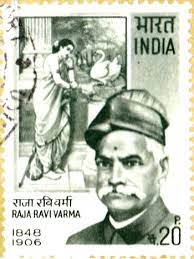 2. His works majorly were of Religious deities from Puranas & Indian Epics. He received world wide acclaim. Many of his works are preserved in Museums through out the world.

3. He received innumerable Awards and honours from various parts of the world. India post also issued a commemorative stamp on Raja Ravi Verma.

4.  Many Indian Directors &film makers made films On the life of Raja Ravi Verma. Even Indian Authors penned books on his life and career.

5. His works created a lasting impact and impressions that many commissioned him to paint their portraits.

National Gallery of Art, New Delhi, Ministry of Culture, Government of India presented a virtual tour, take a look at it:  http://www.ngmaindia.gov.in/virtual-tour-of-raja-ravi-varma.asp?fbclid=IwAR0J7-VvQtW2WP09xMC4e_0xFDrCrcli2HSNGfFWLo0icR5CU4tx4D1gwjA