AN EXPERIENCE OF BEING IN A GUINESS RECORD 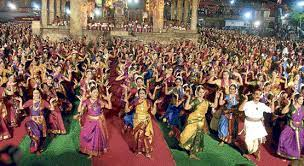 Art festival, Music &Dance festivals are being organised at various levels at prominent places around the world. After a break of two years when the pandemic played the spoil sport,  people sprang up to make themselves a part of these extravagant events by participating in large numbers.

Here is a narration of  a participant in  one such program year s back. Her words depict the joy and the great feel of being a part of such a wonderful event. Let's see what it is and how special ?

The closest  one could get to an ethereal experience recently was watching a 1000 dancers sound their anklets in unison at the famous Big Temple in Thanjavur. The scene was probably similar to the one witnessed by King Raja Raja Chola 1000 years ago : grandly lit temple, an entire town wearing a festive look, and thousands gathered for a  visual and aural treat around the temple courtyard with dignitaries to witness it. The setting couldn't have been more perfect for a Guinness record.

A chance to perform  at this prestigious setting came my way, and pondering over the fact that opportunities like these come only once in a lifetime - 1000 years to be specific -  I jumped at it;

The buzz around the 1000 years celebration of the temple and the Guinness record attempt started months before the actual event. Organized by Dr. Padma Subramanyam and supported by the Government of Tamil Nadu, the workshops, CDs, registrations, instructions, preparations and practices ensured that the months rolled by in a flash.

At Thanjavur, we found out that we were among the lucky few who got to enjoy the luxury of a hotel room, where we could rest after a sumptuous breakfast and before the call for  a tasty lunch. Here you learn how to take power naps while sharing a bed with three other people and yet sleep comfortably.

The hotel was a busy place with dancers, teachers and organizers running all over  the place either to get things in order or just to catch up with friends who had arrived from places as far as Sri Lanka, Goa, Hyderabad and Palakkad too.

After taking our positions on the well -carpeted 1000 years old stage around the Nandi in the temple courtyard, we realised how little drops do make a mighty ocean, "and every drop is equally important," added a wise friend.

Then finally it was our time. The thousand, and in fact more, dancers were on their feet. Just the spectacle of all of us taking our positions attracted applause from the crowd. Soon the dance pieces - a customary invocation to Lord Vinayaka and Karur Devar's verses on the Thanjavur Peria Kovil were performed, blurring the lines between the past and present.

As if in a flash, it was over. Only the applause and the weariness of post -performance remained. Finally , more than the anticipation of having set a Guinness record, the thought that someday, when the temple celebrates another millennium, there would be a mention of our performance kept us smiling and at peace through the journey back home.

After all, how many of the things you have done would be remembered after 10  centuries? !