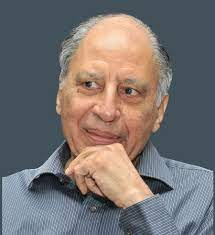 Keki N. Daruwallah is a retired IPS officer and a renowned Indian poet. He was born in Lahore and later moved to Gujarat with his family. Daruwallah holds a Masters degree from Punjab University, Chandigarh. He had a distinguished career in the Indian Police Service and he subsequently became the special Assistant to the Prime Minister on International Affairs.

Daruwallah's writing captures the essence of the multifaceted texture of the Indian society, giving it a forthrightness that shocks the readers. The contradictory realities of India irked him and to put it in his own words.

''One needed a harsh language, words with a saw-edge, words which rasped and got into you like the shards of a broken glass.'' ' The people' is from his first book Under Orion  (1977). His other works include Landscapes (1987) and  A summer of Tigers (1995). Daruwallah is considered a significant poet of contemporary times.