A TEMPLE WITH SPECIAL MUD ON THE BANKS OF RIVER KAUVERY 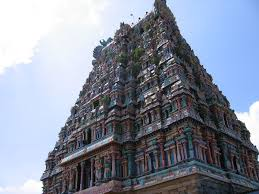 The divya kshetram TIRUCHERAI is 15 kms south of Kumbakonam, and 4 kms north of Kodavasal. The presiding deity  is saranathan in a standing posture and  the goddess is known as saranayaki. The sacred water is sarapushkarni and the sanctum sanctorum is saravimanam.

As per the legend it is believed that Markandeya and kaveri amman meditated upon Lord Vishnu. It is also believed that Brahma made a clay pot to rescue and preserve the vedas during the pralaya, but none of the pots made by Brahma would last. There upon he was directed by Lord Vishnu to proceed to TIRUCHERAI (saara Kshetram) and make a pot out of the clay on the banks of kaveri, and thus the vedas were protected in a pot made out of tough mud at this place.

On thai poosam day ( in the Tamil month of thai -(Jan15-Feb15) on the day of the star poosam) the Lord is taken in procession on a temple car with five goddesses - Sri Devi, BhooDevi, NeelaDevi, Mahalakshmi and Saranayaki, and it is believed that a bath in the sara pushkarani and worship of the presiding deity will ward off all sins. It is believed that Anjaneya (Lord Hanuman) blesses the devotees from the west end of the sacred water tank and Lord Ganesh from the northeastern side.

This  temple has two prakarams and 90 feet high Rajagopuram (Temple tower) There are shrines for Yoga Narasimhar, Rajagopalaswami with His consorts Rukmani and Satyabhama.