A TEMPLE ASSOCIATED TO HANUMAN AND ELEPHANT KING 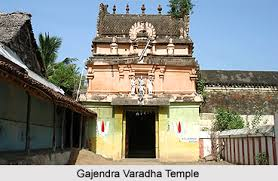 The divya kshetram KAPISTHALAM is located at about 3 kms from papanasam near Kumbakonam in Tamil Nadu.

The presiding deity is Gajendra varadan also referred to as "Aatrangarai Kannan" is in a reclining posture and the Goddess is Ramaamanivalli also called Potraamaraiyaal. The sacred water is Gajendra Pushkarini and the Sanctum sanctorum is Gaganakruthi vimanam

The legend is that while collecting lotus flowers for the Lord, Gajendra the king of elephants was caught by a crocodile. Lord Vishnu responded to  the cry of Gajendra and saved him from the clutches of the crocodile.

Vaali and Sugriva - the vaanara kings are believed to have worshipped at this shrine and hence the name Kapisthalam. This divya desam is closely associated to Anjaneyar (Hanuman) and Gajendran (Elephant king).

Gajendra Moksham is enacted during the Tamil month Panguni. Vaikunta Ekadasi, Sri Rama Navami and Akshaya Tritiya are also celebrated in this temple on  a grand scale.