A GRAND CELEBRATION OF DUSSEHRA IN MYSORE 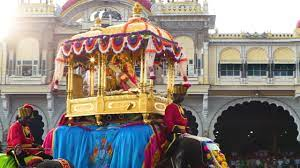 Festivals in India are unique and every region of the country has a special way of celebrating it. There are some places -cities, towns or villages that are famous for the festival that is being celebrated there. In that way Mysore a city in Karnataka - a state in south India is famous for its grand style of celebrating Dussehra - the final day of Navarathri

Dussehra is being celebrated in Mysore from the times of Vijayanagar kings. It is the day celebrated for the triumph of good over evil. Legend says that the goddess chamundeshwari killed Mahishasuru on this day. Because of the mahishasura the city got the name Mysuru. The Goddess is on the hills and that brings the name chamundi hills near Mysore.

"The Mysuru tradition celebrates the warriors and the state fighting for the good during this festival, ritually worshipping and displaying the state sword, weapons, elephants, horses along with Hindu DEVI -goddess in her warrior form (predominantly) as well as the Vishnu avatar LORD RAMA. The ceremonies and a major procession is traditionally presided by the king of Mysuru." states an authentic source.

These celebrations take place at the historic Mysore palace which will be illuminated with extra ordinary lightings on these ten days of festivity. On the day of Dussehra a grand and a specular procession takes place in the streets of Mysore with a traditional procession of the idol of chamundeshwari on the top of a decorated elephant.

The celebrations of navarathri is void without dance and music. Various programmes are organised and artists from all over India take part in this concerts. A rare and a note-worthy attraction is the program of wrestling bout (Khusthi spardhe) were also arranged.

Mysore is also known as the cultural capital of Karnataka because it was the capital of the Wodeyar Kings who ruled the Mysore kingdom for many centuries. Wodeyars were great patrons of art and music and have contributed significantly to make Mysore a cultural centre.

Mysore is well -known for Handicrafts as well as the manufacturing of natural soaps, oil and perfume. Silk sarees and sandal products are famous and synonymous with Mysore.

Mysore is well connected with all the regions of India through flights, buses and trains. No doubt it is a tourist friendly place and you can plan you trip with the help of these:

By Air. The nearest major airport to Mysore is the new Bangalore International Airport, which is about 170 kilometres away. ...

By Bus. You can also take the bus from Kempegowda Bus Station in Majestic (near the Bangalore City Railway Station) to Mysore. ...

By train: The Mysore Railway Station that is located right in the heart of the city connects the city with all major cities in India.